From 392lbs to 195lbs on Keto: Thor Grove Interview

This week we have a really special interview with Thor Grove. Thor has had an amazing transformation, and is an inspiration to ketogenic diet followers everywhere. His story has been covered by major news outlets over the last year, including an interview by The Sun newspaper. Thor’s story began when he decided he needed a change of lifestyle after his weight hit 392 lbs. Thor has devoted himself to exercise and the ketogenic diet, and lost over half of his body-weight over the space of the last two years.  We are absolutely delighted that we could share Thor’s experiences, and hope that his amazing story can provide some inspiration to anyone out there embarking on a new ketogenic lifestyle.

Can you tell us a little bit about yourself.

Hi my name is Thor, I’m 32 and I live in England. I work in IT and recently got a promotion which is awesome. I feel fortunate to work in IT as it is a massive hobby of mine. I have a dog, and I live with my mum and brother currently and they have 4 chickens and a cat which is pretty cool. I love music, I love movies and my main hobbies these days are weight lifting, keto and gaming.

When did you realise that you needed to make a change in your way of eating?

I decided to make a change in July 2014. I met a girl after I had been single for 3 years and really I wasn’t mentally or physically ready for that. It didn’t work out so instead of moaning and dwelling on the breakup I decided I would channel that negative energy and focus it in to something positive and make a change for my health and well-being and I decided I would start losing weight. I fell off the wagon a fair few times in the first few months of trying to make a better me and I remember one weekend I ate so much junk food I literally felt like dying. I never wanted to feel that way again.

How did you find out about keto in the first place?

I had heard of keto over the years but it was actually my brother who got me in to it, he had had really good success and I decided to give it a go.

The thing is I had a problem with carbs… carbs to me are like heroine to a drug addict! I just can’t control it. I heard keto was easy to lose weight on and I was tempted being told I could eat lots of bacon! The thing with keto is you get to eat so much nice food. I didn’t feel bloated or lethargic all the time, and I just found I got on so well with keto. I felt alive, I felt great and that makes it easy to stick to.

What motivated you to keep going on keto?

The constant weight loss and feeling great made it really easy to keep going on keto. I also lost my father last year, I was close to him, but life and distance meant I had not seen him for many years. I saw him for the first time in maybe 5 years face to face a week before he died and he was so happy to see my weight loss journey. Apparently, it was all he spoke about during the time leading up to his death, he was so proud. His wife told me it was like he was able to let go as he knew his little Thor would be ok.See my dad was overweight. He was a body guard for Iron Maiden for many years, and after years of work and abuse and a rock and roll life style, he ended up having numerous health issues. He was in a lot of pain for the last 5 years of his life, and he was so scared I was going to follow in his footsteps with the health issues that he had so it was like he could die and not have to worry about me anymore.

I get asked a lot what motivates me and while I do it for myself, I feel that my gift to my dad was giving him that reassurance before he died that I would be ok, and on that reason and that reason alone I cannot fail. I will die before I fail (I know there is irony in that but you know what I mean.) Because of his death and the travelling I had to do around visiting him prior to his death and his funeral I ended up intermittently fasting and it’s something I’ve done ever since. I follow a 14/10 or 16/8 window and I love it. 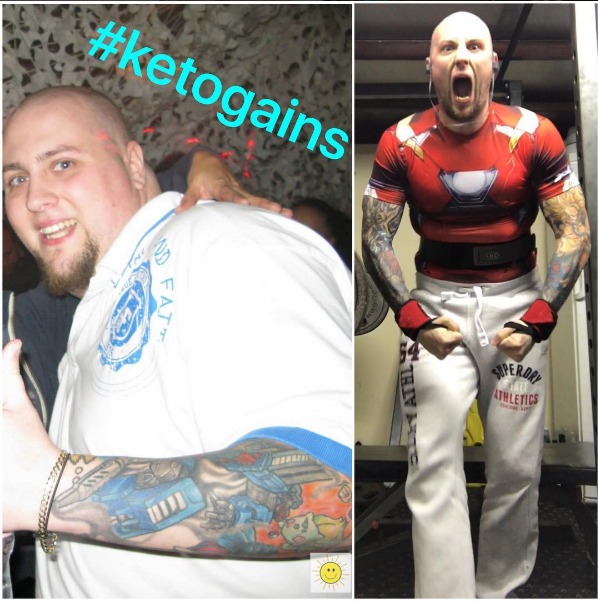 What was your biggest success?

It would be either losing over 200lbs or getting to 16.7% body fat which was done via a DEXA scan in December. Only 15% of people they have ever scanned have less body fat than I did and that blows my mind seeing how massive I once was.

What advice would you give to someone starting out on a ketogenic diet?

Electrolytes, electrolytes and electrolytes! Seriously I have seen so many people over the years fail because they are tired, have no energy, have keto flu and are grouchy and it’s all down to lack of electrolytes, mainly the sodium. I am taking this from the ketogains.com website as per their electrolyte recommendations and this is what I follow and I feel great all the time “Even if you go out of your way to eat lots of table salt and foods containing potassium and magnesium, you may find you need to take supplements. The minimum daily intake for the three electrolytes suggested by Lyle McDonald as: 5000 mg of sodium (not just salt) 1000 mg of potassium, in the form of potassium chloride or potassium sulfate 300 mg of magnesium, preferably in the form of magnesium citrate All these electrolytes should be preferably consumed in addition from what you get from your food; so then it would read: 5000 – 7000 mg of sodium (not just salt) 1000 – 3,500 mg of potassium 300 – 500 mg of magnesium”

Currently I am following a TKD (Targetted Ketogenic Diet) which means I have 10g of Dextrose pre-workout. An example of what I eat in a day would be:

Wake up. half a lemon, 4g pink salt and 2oz water.

1:15pm; 200g of chicken steamed and then dry fried with a low carb rub and 2 eggs mixed in all scrambled with an avocado. I supplement fish oil here, multi vit and Vit d3. 1litre of water with 2 electrolyte tablets 2g of iodized salt and 2g magnesium calm.

5:15pm; 100g of chicken steamed and dry dried with a low carb rub and 1 egg mixed in. I supplement fish oil here and multi vit

10-10:30PM: 100g of chicken steamed and dry dried with a low carb rub and 1 egg mixed in. I supplement fish oil here and multi vit

Ketogains.com they are a science based group who keep up to date on the latest studies and research, it’s a really good group.

From all of us at The Keto Cookbook, we would like to give a massive thanks to Thor for chatting to us. He is a testiment to what can be achieved if you work hard and follow your diet and excercise plan. If you would like to follow along with Thor’s progress, you can find him on Facebook at https://www.facebook.com/thor.grove, or on Instagram at https://www.instagram.com/thorthegiant.